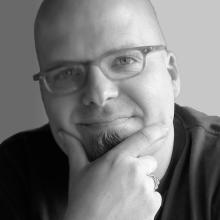 Bryan Anderson is the director of art and media production for the NFLC.

Over the years, Bryan has been the creative lead on many NFLC projects and has overseen the NFLC brand, including logo designs, marketing materials, trade show displays, and corporate identity systems. He has also served as the chair of the NFLC’s strategic planning committee.

Prior to joining the NFLC, Bryan was the manager of digital media products in Product Strategy and Development for the Laureate Higher Education Group. He has been the owner of several small businesses, including an internet hosting company that was acquired in 2012.