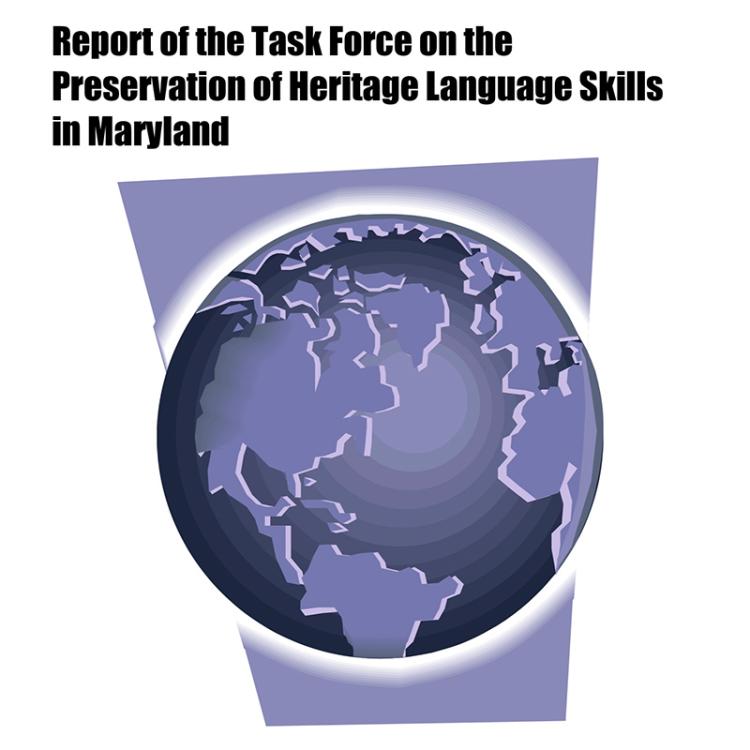 Submitted to the governor and Maryland General Assembly, January 1, 2009

Note from the Chair

The Task Force for the Preservation of Heritage Language Skills in Maryland was established by Governor Martin O’Malley on July 1, 2008, in order to investigate current language preservation efforts and to develop new strategies in preserving world language skills in our State. To our knowledge, this is the first state-sponsored task force on heritage languages in the United States.

Maryland is home to an unusually diverse and well-educated immigrant population. Newcomers recognize the preeminent importance of mastering English, and many also strive to maintain their heritage languages, speaking them at home and hoping their children will become fluently bilingual. Heritage language speakers represent a vital resource to our commercial, educational, and cultural communities. In order to maintain America’s competitive edge in such vital sectors as trade and national security, it is critical that we provide for the preservation of our heritage languages, while assuring that our new Marylanders have ample access to effective English language programs.

The strengths of Maryland’s state education system, the strategic and international orientation of many of its corporate and governmental employers, and the unique resources of the national capital area position Maryland to take a strong leadership role in assuring that the language skills of its immigrants are preserved to the benefit of the State and the nation. In these difficult economic times, it is encouraging that many strategies identified in the study are extremely cost- effective. The work of the Task Force itself – characterized by commitment, expertise, and creativity - has borne witness to the feasibility of effective collaboration across sectors and to the timeliness and significance of this effort. It is our hope that this report will serve as a catalyst for a robust initiative that will break further new ground in the coming years.