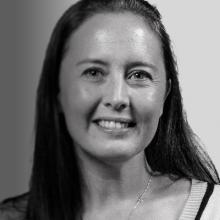 The National Foreign Language Center is dedicated to helping people understand each other and the world around them. Working with an extensive network of world language education professionals, Ms. Halladay has overseen project teams in the development of language learning, practice assessment, and high-stakes testing materials in upwards of 100 languages and dialects, across Interagency Language Roundtable (ILR) levels 1 through 3+. Ms. Halladay works with her colleagues to continuously expand the National Foreign Language Center’s already extensive collaborative network of world language education experts, particularly in low-density languages and dialects, and languages less commonly taught within the United States.

Prior to joining the National Foreign Language Center, Ms. Halladay served as a part-time director of International Education at a small non-profit serving youth populations in Nicaragua; a co-operative researcher in international education at the National University of San Martín in Argentina; and a quality improvement and program analyst at the University of Pennsylvania.